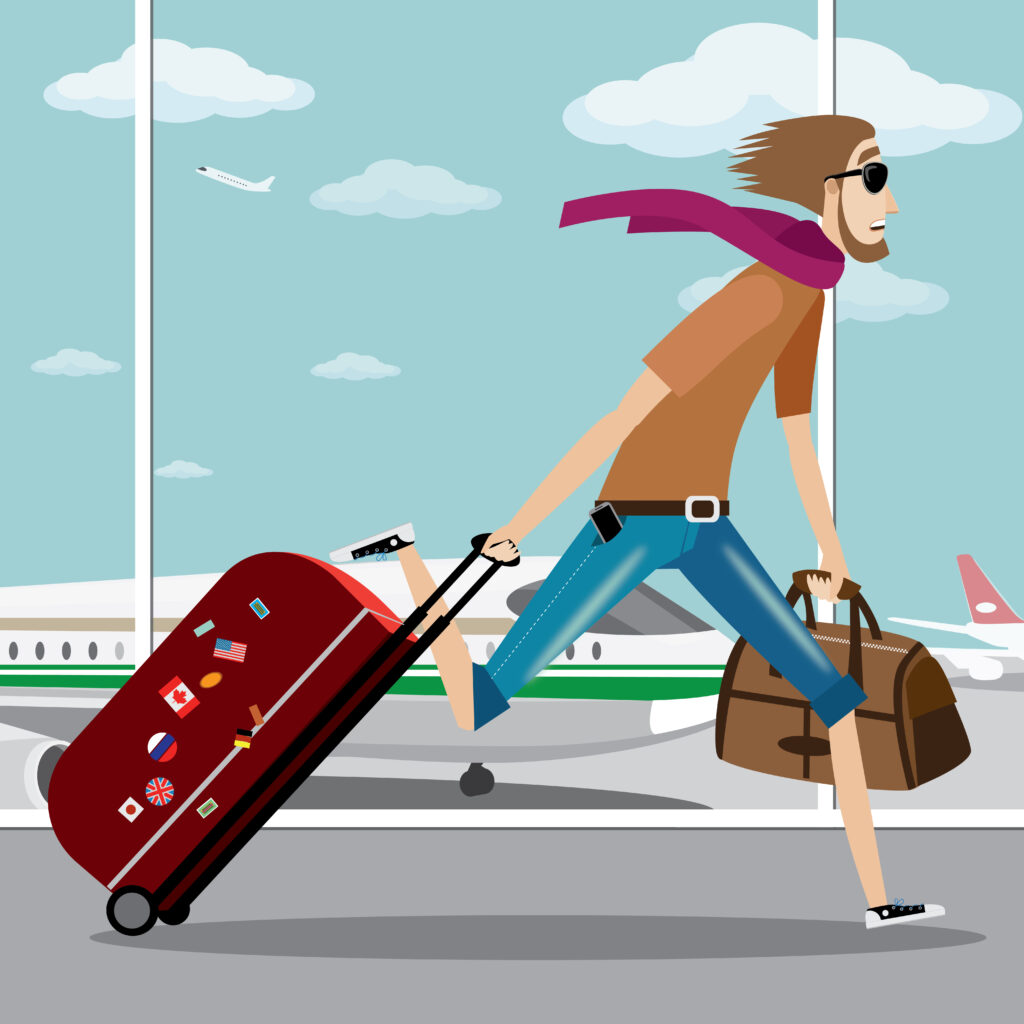 Essential English for a flight 

As we are reaching the Easter break, and airline bookings have reached pre-pandemic levels, it is more than fitting to dedicate a blog to airport vocabulary! Language differences make navigating your way through a foreign airport challenging, but you are in luck. Whichever airport you are in, whether it be Tokyo or Sao Paulo, you only need to know a set of vocabulary in one language, English! Now, it is essential to master airport vocabulary, or you might end up in a place very different to the one planned without any accommodation, so read and learn these set of words well!

A company that provides travel by air is called an airline.

A boarding pass is another word for an airline ticket. It is what passengers must show before boarding a plane.

to book a flight

To book a flight means to reserve your seat on a flight.

A non-stop flight flies to its final destination without stopping.

A direct flight stops before arriving at its final destination, but passengers do not have to change planes.

A connecting flight stops and passengers must change planes.

The term layover refers to the stop at an airport in order for passengers to change planes.

First class tickets are the most expensive tickets that airlines offer. First class seats are in the front of the plane and are much bigger than the other seats on the plane. Airlines usually offer premium meals to passengers with first class tickets.

A suitcase is a bag with a handle used for holding clothes or other possessions.

All the suitcases and bags that a traveler has with them on a trip is called luggage.

carry on bags/carry on luggage

Carry on luggage is the luggage passengers take on the plane with them.

An airport tax is a tax paid by passengers for using an airport.

The check-in counter is where passengers go to get their boarding passes and check their bags.

Security is where passengers have their possessions checked before they get on their flight.

An arrival is a flight arriving at the airport.

A departure is a flight leaving the airport.

If a flight leaves at its scheduled time, the flight is on time.

If a flight leaves after its scheduled time, the flight is delayed.

If a flight doesn’t leave the airport at all, the flight is cancelled.

The gate is where passengers show their boarding passes and get on the plane.

To board a plane means to get on a plane.

Aisle seats are the seats next to the aisle on the plane. The aisle of the plane is the place between the rows of seats where people walk.

A window seat is the seat next to the window.

A middle seat is the seat between the aisle seat and the window seat.

Flight attendants are airline employees who help the passengers on a flight.

The person who flies the plane is called the pilot.

When the plane leaves the ground, it takes off.

Take off refers to the moment when a plane leaves the ground.

Turbulence is strong wind that causes an airplane to move and shake.

When a plane arrives at a destination, it lands. To land means to touch the ground.

The place at an airport where non-residents must pass is called Immigration.

The baggage claim is where passengers go to collect their checked luggage.

Customs is the place at an airport where government officials check the products that are entering the country.

A customs officer is a government official who is responsible for checking the products entering the country.

to declare an item

To declare an item means to report the item to customs.

Jet lag is tiredness travelers experience when they travel from one time zone to another.